Martin Kemp: ‘I can never get away from the tinnitus’ 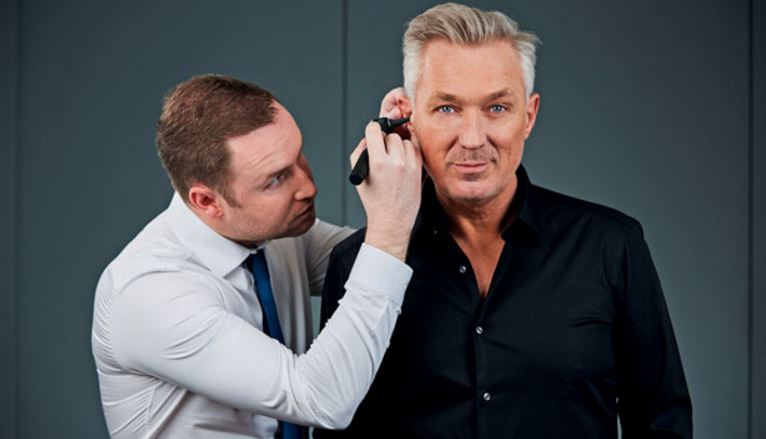 Spandau Ballet bassist and former actor Martin Kemp’s enjoyed adulation and fame during his 40-year showbiz career. But, he tells us he paid a price for all those hits…

Screaming fans and pounding music were the soundtrack to Martin Kemp’s life in New Romantic group Spandau Ballet, but, for the first time, he’s revealed the distressing personal cost of that success. His permanent souvenir of those heady years is tinnitus, a relentless high-pitched whistling sound in his head caused by prolonged exposure to loud noise, and he also recently discovered he has high frequency hearing loss.
The dual damage to his hearing is a legacy of playing bass in front of amplified sound systems while performing on stages around the world when the band were at the height of their fame in the Eighties.
Hard to ignore
He says: “I love the memories, but I can never get away from the tinnitus, which is very frustrating. It can drive me a bit crazy at times. When I’m busy, it’s easier to ignore as my brain’s distracted and seems to have learnt to block it out. It’s definitely hardest at night when it’s quiet and all I hear is a loud whistling in my ears.”
Around 10% of adults (six million people) in the UK have mild tinnitus and the noise experienced ranges from whistling, buzzing and humming, to whooshing and hissing, according to national charity, Action On Hearing Loss.
It says around 1% (around 600,000) feel the condition affects their quality of life. It also estimates more than 11 million in the UK have some form of hearing loss. “It’s classic ‘rock band’ hearing loss, which is hardly surprising as I’ve been in the music industry since I was 17,” declares the 55-year-old, who was recently a judge on BBC talent show, Let It Shine.
“I wouldn’t have dreamt of asking anyone to turn it down because I felt the ringing was like taking home a souvenir of success. As a young lad, I’d have said, ‘Louder, louder’ – you don’t think of long-term consequences at that age.
“Anyway, at that stage, my ego was so inflated it had left the planet and I probably wouldn’t have listened even if someone had warned me. We were 20-something boys on top of the world, in the biggest band in the world, and we had some fun with it. I have no regrets.”
Battling the stigma
Although he’d have no qualms about wearing a hearing aid, his hearing loss is not yet bad enough to require it. “There shouldn’t be a stigma about hearing aids because they’re no different to glasses, and nowadays they’re so efficient and tiny no one can see them,” says Kemp, who’s backing a Specsavers’ Listen Up! campaign to encourage people over the age of 55 to get their hearing tested regularly.

I still love going to concerts. Music’s my passion, even though the noise does make the tinnitus worse, but at least I don’t stand in front of the speakers now!”

If Kemp appears laid-back and philosophical about his hearing problems, it’s because they pale into insignificance compared to his life-threatening health crisis in the Nineties.
In 1995, he discovered he had two brain tumours and credits his wife, Shirlie – the couple have been married 28 years and have two children – for getting him through. They met when she performed on Top Of The Pops as a backing dancer for Wham!
The most traumatic period
“I’ve had a lot worse in my life than tinnitus. Having the tumours was the most traumatic period I’ve experienced, but I always say it was the luckiest time of my life.
“That’s the only way I can deal with it really. I had two tumours and one was sitting right on the outside of my skull. If Shirlie – who’s my best friend as well as my wife – hadn’t spotted that one, I would never have found out about the inside one, and that one would have killed me. I was very fortunate,” says Kemp, who had one tumour removed immediately after diagnosis and the second two years later in 1997.
“It was much tougher for my family than for me as they were coming into hospital day after day thinking each time it could be my last day. For about a year afterwards, I had this ‘rose-tinted spectacles’ view of life where nothing bothered me because it was so amazing to have survived. You get over that and life returns to normal, but it does give you a perspective on what’s important,” he explains.
“Over the years, I’ve also learnt that when you have success in life, you should stand back, breathe it in, and appreciate the moment. When I was young, I was always looking ahead to the next goal. Once we’d played 2,500 at the Hammersmith Odeon, all we thought about was wanting to play 10,000 at the Wembley Arena and then we focused on 100,000 at Wembley stadium. You’re never quite satisfied, but the older you get, the more you realise how important it is to appreciate things and live in the moment.”
Fuente: http://home.bt.com